On January 13, 2017, the Department of Homeland Security (DHS) announced that the City of Los Angeles (Mayor’s Office of Public Safety) was set to receive funding under its Countering Violent Extremism (CVE) initiative. The City of Los Angeles would receive $400,000 for a program involving “Training and Engagement,” as well as $425,000 for “Managing Interventions.” According to DHS, the stated purpose of the CVE program was to “develop and expand efforts at the community level to counter violent extremist recruitment and radicalization to violence.”

​The #StopCVE coalition in Los Angeles—representing local non-profit, civil society, advocacy, and digital advocacy groups, alongside Muslim leadership from across LA—has been organizing opposition to CVE since April 2016. Though presented under a guise of public safety and community-based programming, CVE efforts in LA have been implemented with selective community engagement and buy-in. This “community engagement” continued despite unanimous opposition from civil rights groups and the majority of Muslim communities across five counties in Southern California.

The #StopCVE coalition in LA delivered a petition with more than 1,400 Angelenos’ signatures to LA City Council in early June 2018.

Check out our webinar on CVE here.

Soon, the LA City Council will move to discuss disbursing federal funding amounting to , which targets Muslim communities in the city through activities conducted under the auspices of CVE. 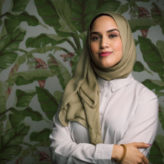 Kifah Shah is MPower Change’s Digital Campaign Manager. She grew up in Southern California and has been organizing since she was 15. She has worked for the Asian Law Caucus, Clergy and Laity United for Economic Justice, Unite HERE! Local 11, and UC Berkeley’s Multicultural Community Center. Kifah also worked abroad in Europe at the Migration Policy Group on issues related in migration, as well as in Pakistan at the Aman Foundation/USAID on issues of health, education, and economic empowerment. She is currently a TED Resident and on the Board of Trustees for MSA West. Kifah holds a Masters in Public Administration (Economic Policy) from the London School of Economics and a Bachelor of Arts in Ethnic Studies from U.C. Berkeley.